Save the Eastern Shore - Group Opposed to Salmon Farms 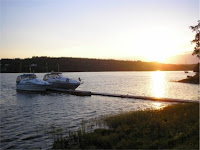 In June of 2011, Nova Scotia's Fisheries and Aquaculture approved two new salmon aquaculture sites in the St. Mary's Bay, Digby, stating that the farms "will create good jobs in southwest Nova Scotia, while the license agreements will ensure protection for other marine industries and the coastal environment".

The media announcement went on to state that "the government will ensure there are no significant adverse effects of salmon farming on the marine environment and its associated fisheries, including the valuable lobster fishery".

Residents of the Eastern Shore who are opposed to the establishment of three proposed salmon farms might well question just how the government will guarantee 'no adverse effects' from the following threats to the lobster industry and the economy (not to mention the already decimated wild salmon population) as compiled on the Nova Scotia Salmon Association's website.

General affects of aquaculture include:
loss of coastal habitat;
pesticide pollution;
greasy coatings on beach rocks;
waste deposits on tidal flats; and
increased present of algae in the water.
In Scotland, salmon farmers have been known to use a chemical delousing agent called dichlorpos to reduce infection of salmon by sea lice. Studies show that this chemical can kill oysters, mussels and other shellfish within 25 meters of the salmon cages where it is used.
It requires at least three kilograms of marine protein to produce a single kilogram of domestic salmon. Domestic salmon are fed by fish caught in the world's oceans. Fish used to feed domestic salmon includes:
Herring;
Mackerel;
Anchoveta;
Anchovy; and
Sardinella.
Concerns are currently being raised around the world about the affects of genetically modified foods on human beings. Salmon that are being raised in aquaculture farms today may fall into the category of genetically modified foods.
In 1997, approximately 300,000 Atlantic salmon were accidentally released into Puget Sound, British Columbia.
In Norway, it is estimated that as many as 1.3 million salmon escape from farms every year and one third of salmon spawning in coastal rivers in Norway are escaped domestic salmon.
Escaped domestic salmon compete with wild salmon for food and for spawning habitat. Studies from British Columbia demonstrate that domestic salmon have begun to spawn and colonize in areas formerly occupied by wild Pacific salmon.
In Norway studies indicate that there are areas where escaped domestic salmon have completely engulfed the historic range of wild salmon.
Interbreeding between wild and escaped domestic salmon can result in the creation of "bad genes". Fish with these types of inferior genes may lose the ability to spawn and survive. The fish may not know where to spawn or may try to spawn at the wrong time of the year.
Escaped domestic salmon can carry disease that is spread to wild salmon populations through mixing in the ocean and interbreeding. Diseases that have spread from domestic species to wild species include:
infectious hematopoietic necrosis virus;
bacterial kidney disease;
Whirling Disease;
Parasitic infections including Gyrodactilus; and
Infectious Salmon Anemia ("ISA").
Studies in Scotland have shown that if a river is less than three miles long and flows into the sea in an area where a salmon farm is located, the river's indigenous wild population will be dead."

Granted, the issuing of license-leases to operate finfish farms in the province include the following regulatory conditions:

- participating in the province's Environmental Monitoring Program audited by department staff and shared with Fisheries and Oceans Canada, and which requires third-party monitoring and analysis of water samples

According to Fisheries and Aquaculture Minister Sterling Belliveau, a significant (note the qualifier) breach of any of these, or one of the many other terms and conditions, could result in the cancellation of an aquaculture licence or lease.

Awww, gee. Bad fish farmers. And how will the government insure safety to the lobster industry once the damage is done? The truth is, they can't. 'Domestic' salmon and trout farms, with their promise of 'local jobs', is a political carrot, usually trotted out along with highway paving issues just before an election.

Once the damage is done, it's too late. "Insuring safety" is political rhetoric, one of those loose terms used to throw us off track. Note they didn't say they 'guarantee'.

The real question is, once the virus is out of the bag so to speak, what's to be done about the dead and dying wild salmon population along the Eastern Shore - and the disappearing lobster industry?

Those opposed have set up a website (Save the Eastern Shore) to alert residents of the proposed farms and a series of community discussions will take place to voice their concerns. In Sheet Harbour, the date is February 6th at the Lions Club, 6-9 pm.