It seems the newly arrived commuter types enjoy the peacefulness of the country (not to mention lower cost housing) but they don't like the 6:00 am rooster wake up call, the baa-ing of spring lambs, t 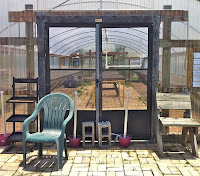 he smell of new mown hay, or the 'hideousness' of the metal roofed farm storage quonsets on their prim, landscaped 'streets' -- streets that, incidentally used to be simply RR#1 or RR#2.

Do I sound cynical? I guess that's because I am. While I understand that the city has to grow and only has so many directions available that don't stop abruptly at the ocean's edge, the recent bylaw accentuates again the short sited vision (or lack thereof), that has city councillors like Lorelei Nicoll succumbing to a threat of "no votes" unless she 'gets rid of the quonset' during her campaign. Excuse me? And only four people complained?

But that's another matter. The point is, Regional Council okayed the bylaw, without giving much thought to the agricultural need for such storage buildings.

According to the Herald, a 'frustrated' Cole Harbour resident stated that he's not 'interested in viewing them [quonsets] from [his] picture window' and that they 'belong on farms, commercial areas or large bodies of land" . Oh, yes, that's right. Just like the one you obliterated when you built your tidy little landscaped bungalow lots? Got it. So, what was wrong with the 'unsightly premises' bylaw for this 'one' quonset?

Anyway, luckily for small, once rural businesses like Walker's Feed Store at the edge of Cole Harbour-burb, their quonsets are already built (thus grandfathered) and with any vision, they've invested in farm land 'beyond' the reach of the frenzied, latte drinking and texting burbanites who moved to the country to 'breathe fresh air', but don't want to have to actually um, look at it.

Tell you what. Let them have the commuterville burbs. Sell them your farm land (with a quonset), for a hefty price of course, and let them tear it down (or create another used furniture store or whatever). Who cares?